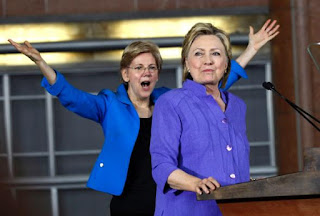 This is the lovely picture the left paints of all conservatives and republicans .  They will tell you no they don’t but they always have and it’s just that since Trump entered the race they added a new word to their expansive vocabulary the word ‘Misogyny”
Ever notice they all repeat the same things? From Obama to Hillary and her supporters and coursing through the vines of the left wing media?

This is the same group who also labeled anyone in the Tea Party with these same labels while not admitting we have a Radical Islamic Terror Problem in the world.

The democrat party has really become such a party of substance.

The latest display of sheer ignorance was the Blues Sisters Hillary and Warren up on the stage screeching like they were gong to cry at any moment beating their republican war drum.

Nothing on the economy. No plans on immigration except to let thousands more come through. The left are the biggest hypocrites going. They love that the stock market went down after the Brexit vote and now that it has recovered ….crickets.
They call Englanders racists because they don’t want ‘would be ‘terrorists entering their country anymore. Yet these same people will cheer when Michael Savage and Donald Trump were banned from England.

The pretend to support the middle class yet during the debates when Hillary was asked about the unaffordable health care increases her answer was pretty much “That’s too bad for you”. As always the end justifies the means.