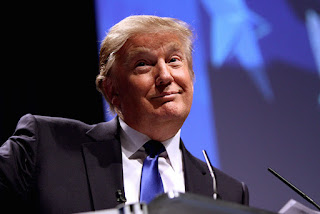 After watching the entire 29 minute video below with Donald Trump and NBC News, I really think that if we’re able to hold on to 2016 and actually have the presidential election, Donald Trump will be the man who’s at the helm at the end trying to right this sinking ship. We have embedded a poll on Trump for our readers down below video; please vote if you’d like.
When asked why he’s running, he was straight to the point: “I want to make America great again. Be honest, the country is in trouble…We are Greece…Greece on steroids…The country is a mess….whether it’s illegal immigration, whether it’s the way we treat the Veterans, the country is a mess.” Trump  tells it like it is in the full interview – telling us why he so strongly supports US Veterans and the 2nd Amendment and why HE will win the Latino vote if he wins the Republican nomination, because he’ll create jobs while neither Hillary nor Bush have a chance to as the country goes to hell. Trump offers solutions. The others only offer more problems.
Telling us HOW he’ll win the Latino vote, Trump tells us he’ll bring jobs back to America by taking them back from China and taking them back from Japan and clearly sending a collective shiver up the backs of the mainstream media and the political establishment on both sides of the aisle as a man who finally makes some sense and is not afraid to speak his mind.
Quite simply, Donald Trump scares the hell out of nearly all of the other political candidates out there and holds nothing back. While I’m quick to say that I don’t agree with all of Trump’s policies, listening to him here shows a man with no fear who speaks with conviction and quickly lays down the law as the interviewer gets out of line or asks a question off point.  I cannot wait to see Trump in the debates. A non-politician, I've got the feeling he’ll school these other politicians like apprentices.
Trump makes it clear that he has nothing against legal immigrants and slams home his point; he is angry that the Mexican government is dumping their criminals, over and over, into America while our govt provides ‘sanctuaries’ to them. Trump knows that not all of them are criminals. As a person who is a legal US immigrant here from Argentina once said, he’s mad as hell that illegal immigrants are allowed into the country when he went through the time and by the law to do it the right way.
Meanwhile:
Trump is establishing a hotline and email address for veterans to share their stories on how the Veterans Administration should be reformed. He pledges that if elected president he will take care of the veteran complaints “very quickly and efficiently like a world-class businessman can do, but a politician has no clue.”
Posted by Lisa at 9:12 AM