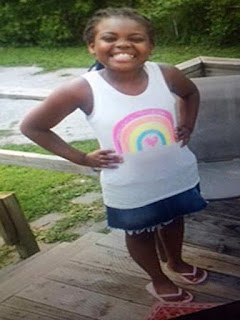 A 9-year-old girl was shot and killed Tuesday in Ferguson, Missouri, while she sat in bed doing her homework, her family says.

"I never in a million years thought that I'd be laying my daughter to rest," said James Bolden, 9-year-old Jamyla's father,
Jamyla's 34-year-old mother was also shot in the leg, but she has since been released from the hospital and is expected to make a full recovery.
As of Wednesday night, police had no suspect in the attack, though investigators believe that the shots were fired from close range into the home, which is one block from West Florissant Ave., the center for protests in Ferguson after Michael Brown was shot and killed.

Will there be protests for his little girl? Does her life matter ? Who is going to stand up for her?
This is unacceptable and it should be unacceptable to this community .

I want to see the outcry and a movement for this tragedy. Because this is a true tragedy. Another "innocent" child killed just sitting doing her homework in her home where she is supposed to be safe.
I am sure we will hear nothing from the left wing media as to not "insult" the criminals.
This should be in the forefront and condemned otherwise this will continue. Expect to see more of this as cops are having their hands tied more and more.
What is wrong with our country? What happened to our priorities?
Take a good look at that little girl and ask yourself how you could not advocate for her life and the life of so many innocent children being killed in crime ridden neighborhoods.
Where is our president and the left on gun control now? This is not an isolated incident ,this is a way of life that we are turning a blind eye to and we should be ashamed of ourselves.