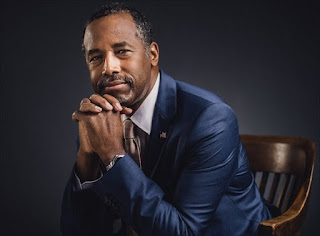 Ben Carson, a political newcomer, and former neurosurgeon, is proved to frighten hardened liberals, but the curious question remains: Why?
Liberals, including the liberal media, are petrified of Doctor Ben, possibly because of Carson's character and potential for success, why is he  on the short list of most electable Republicans in the 2016 General Election? Maybe it is the electable Republicans that frighten the Liberals so. Just take a look at the liberal's own slate of candidates to understand it.

And there is the the ultra liberal Democrat party has no one that they can count on to win the next election if Americans wake up to the real problems that face their nation. Joe Biden is not in the race, and truthfully, is just another Liberal, who has never done well when he has run for president on two occasions. Hillary is damaged goods by the electorate, while Bernie Sanders is a committed Socialist ,with nothing else to offer.

Ben Carson, on the other hand, is an original thinker, with brilliant cognitive abilities, who speaks with an honest heart.  Carson transcends many things, but most notably, he transcends the  fact that he is not a practiced politician, or at least wasn't in the beginning of his run.

And as a politician seeking the highest office in the land, he answers questions about issues, on nearly every subject.  Making himself,  available by telling the truth, as he knows it, and that truth scares the Liberals by challenging their  view of their world order. Dr. Carson goes too far beyond their limits of stereotypes, so the  Left is  dumbfounded.

Dr Carson burst on the scene, like a political supernova on February 7, 2013 at the National Prayer Breakfast, by challenging their political God, Hussein Obama. And continued on the varied news and opinion channels as his views were sought to counterbalance  the status quo. His tone was calm and measured, but his message was powerful, and eventually, grew bolder.

And liberals don't know what to do with this man, not because he is black per say, but because he doesn't fit the mold of what liberals  "expect" (demand)from a black man,especially one with a ,God forbid, "R" after his name.
Posted by Lisa at 8:09 AM