For The Trump Haters 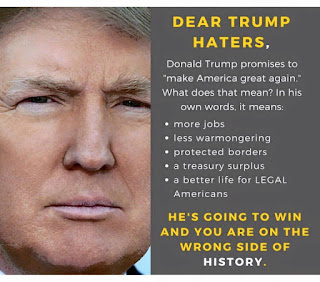 To President Trump haters , when truth and reason fail, you feel the need to resort to lies , scare tactics and inunidos !
Is this the best you can do ?
President Trump has done more for this country in one year than Obama did in eight !
He’s rebuilding the military , rebuilding the VA hospital system , lowering taxes for millions and corporations which will repay riot millions of dollars back into the country , creating thousands of jobs by rescinding economic regulations and restrictions , has Isis on the run , fighting for better trade deals with other countries and securing the southern border and putting an end to chain immigration , just for starters !
What really has you Social liberals running scared is that the American public will see what a great job he’s doing and vote out more social Liberal Democrats !
God Bless Him !
Posted by Lisa at 8:50 PM