The Root Of The Problem 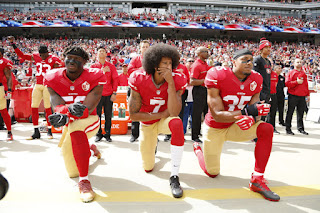 Children raised in fatherless homes, especially black children,
are far more likely than children raised in two parent homes :
to engage in criminal behavior and thus, have contact with police.
Therefore, when they father a child with a woman to whom they are not married - or at least living with - they are contributing to the problem against which these football players are taking a knee.
If you look at many of these players' records on out-of-wedlock children, you find that they are contributing significantly to the problem against which they are protesting.
For example, Antonio Cromartie has 12 children by 9 different women. Apparently the NFL had to shell out $500,000 before he could even play football for them.
Travis Henry has 11 children by 10 women, Willis McGahee has 9 children by 8 women,
Derrick Thomas has 7 children by 5 different women, Bennie Blades has 6 children by 6 women,
Ray Lewis has 6 children by 4 women and Marshall Faulk has 6 children by 3 women.
Before these guys take a knee they should take a good look in the mirror.
It appears that their problem is not the knee.
Posted by Lisa at 6:45 AM