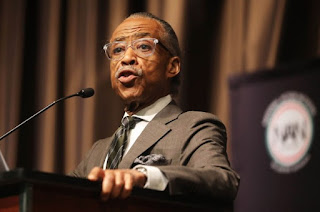 Rev. Al Sharpton, a master of agitation, could soon be a doctor of humane letters.


Taxpayer-funded Medgar Evers College, a CUNY school in the middle of Crown Heights, is planning to bestow the honorary doctorate on the man many say inflamed tensions during the bloody 1991 race riots in the Brooklyn neighborhood.


The college, in a resolution to go before a committee Monday, says it wants to recognize Sharpton’s “unwavering commitment to racial, educational and socioeconomic equity” at its June 5 commencement.


The degree would come nearly 28 years after Sharpton played a key role in the days of violence that rocked Crown Heights.
I guess it was a toss up between his role in Crown Heights or the Tawana Brawley Hoax. Why do liberals live in an alternate universal?
Posted by Lisa at 9:43 AM